This school year, we expanded Morgan Park Academy’s World Languages offerings to include Mandarin as a full-year program beginning at the Middle School level.

Students and parents now have the opportunity choose Mandarin as a full-time language of study in Middle School and continue to study the language in Upper School. It’s a chance for students to learn one of the most spoken languages in the world.

I love that Mandarin is now a part of the full-year offerings. Giving students more choice in the languages and cultures they want to experience is one of the missions of the World Languages department at MPA. We anticipate having many engaging and innovative Mandarin classes.

I had the pleasure of talking with our Mandarin teachers, Dr. Heng Zhao (pictured above) and Mrs. Dali Shi (below), about their roles. 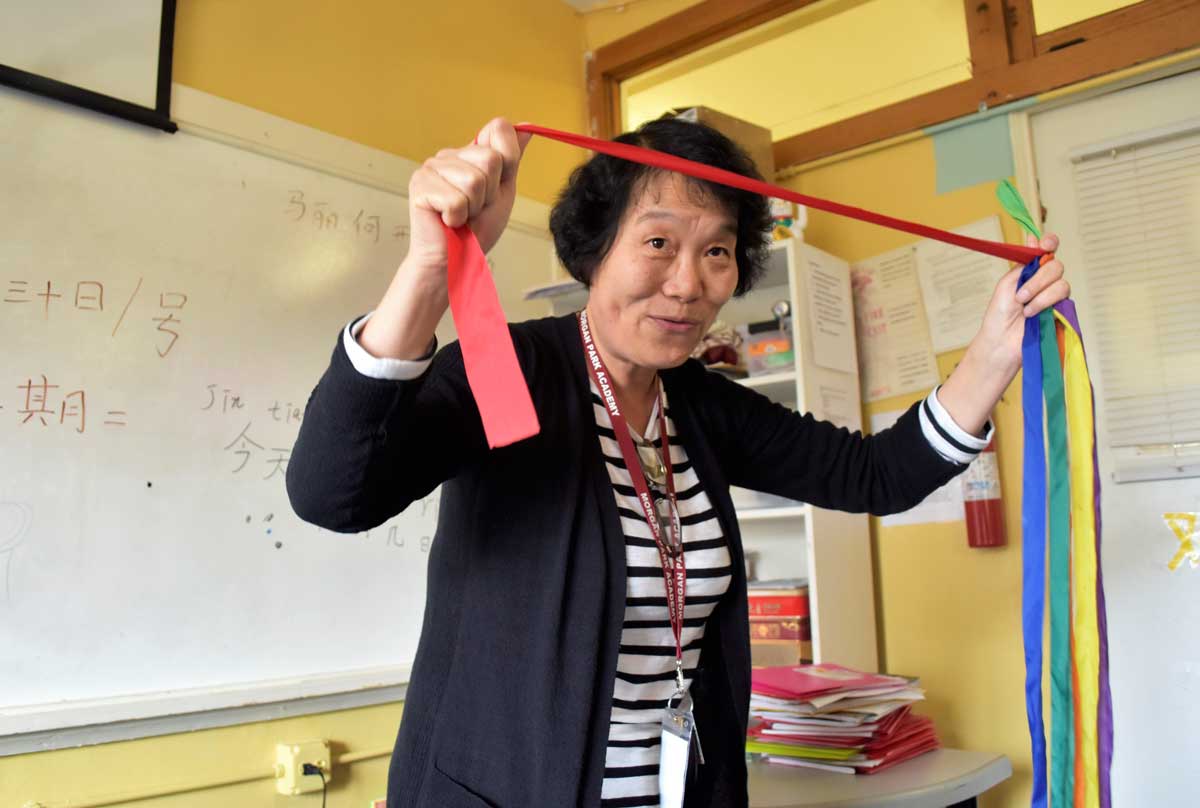 What’s your favorite aspect of the Chinese language to teach to students?

“Chinese food, art, architecture, poems, and family are among my favorite aspects when I teach Chinese language and culture. I also like to teach Chinese characters because they are so unique and beautiful.”

“I love teaching cultural differences between China and America. These differences manifest themselves in every detail of life. For example, I like to teach my students why teachers are called by ‘Last Name Teacher’ (for example, I am Shi Teacher in Chinese) instead of ‘Mrs. Shi.’ The respect for teachers in China is very great.

“I also love teaching written characters. Not only because learning to read and write is the most difficult part, but every character is made up of unique strokes and the pattern and composition of these strokes matter in the meaning of the character. There is also history behind how those compositions evolved over time.”

How important is it to learn the Chinese language?

“Chinese is the most spoken language in the world. There are more people speaking Chinese than English. Chinese is the third-most spoken language in the U.S. after English and Spanish. Chinese culture has fundamental influences on the whole East Asia culture. China plays a major role in world affairs. China is an important business and economic partner of the U.S. and the world in spite of the conflicts. The Chinese language may give you an edge when competing for employment.”

“When I travel to China, I notice the huge emphasis that Chinese students place on learning English. It is their most important foreign language. However in America, the enthusiasm for Chinese is not reciprocated. Because Chinese people will understand American affairs more than Americans will understand Chinese affairs in the future, this can create a dangerous imbalance in international relations between the two countries. When I was working for a college, my students could also easily find jobs teaching English in China if they knew how to speak Chinese.”

What can students expect when they enter your classroom?

“The students can expect a fun but challenging learning experience.”

“When they come to my classroom, students can expect to learn Chinese from a number of different interactive learning styles. I teach the language using multimedia including music and songs, educational videos, acting out skits, and cooking traditional Chinese food to engage with students.”

Why did you decide to become a Chinese language teacher?

“I got a B.A. in Second Language teaching and Ph.D. in International and Comparative Education. My grandpa was a diplomat and later a professor of International Law and French language. Therefore, speaking different languages, learning different cultures and travel around the world have always been my interests.”

“I received my Bachelor’s and Master’s degrees in Chinese Languages and Literature. Because both of my parents were teachers, I always wanted to become one myself. I became a Chinese language teacher the day I graduated from school. When I was in China, I taught Mandarin to international students in Chinese universities. Since immigrating to the United States, I’ve taught American students of all ages, from Pre-K to college. Being a teacher has been my lifelong calling.”

Sra. Harris teaches Spanish and is our curriculum leader for World Languages.