Middle School Teacher Honored as ‘Hero in the Classroom’

By Kyle Garmes
The Beverly Review

It was a surprise for Morgan Park Academy middle school teacher and assistant principal Dan Peters when he was honored by the Chicago Bears, but for his students and colleagues, it was no surprise that he deserved such recognition.

Peters thought he was attending a secret school assembly, but instead, he was soon on stage with representatives from the Chicago Bears, who gave him a check for $1,000, tickets to the Bears game on Oct. 4 and other gifts.

Peters, a fourth-year history teacher at the school, was named a “Symetra Hero in the Classroom” for his ability to help students love their classwork.

According to Symetra, Peters was one of 16 kindergarten to 12th-grade teachers who the organization will honor during the NFL season. 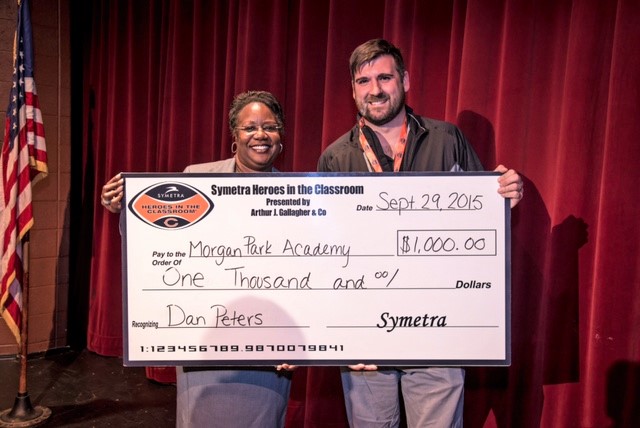 Peters was nominated by MPA parent Lori McGunn, whose son Eddie had Peters as a teacher.

In her testimonial, she lauded Peters for his creativity, saying kids write poems and songs in his classes and even performed a play for the final exam.

That approach, she said, makes students love him as a teacher.

“Mr. Peters inspires every student by making history come alive. From amazing classroom activities like ‘Be a business mogul from the 1920s’ to a Project Week trip to Springfield and St. Louis, Mr. Peters transforms history from ‘endure’ to ‘enjoy’—and that makes kids want to learn. That’s what makes Mr. Peters my hero.”